Get ready to solve one of Vancouver’s oldest murders

The podcast ‘Nice Genes!’ explores the infamous ‘Babes in the Woods’ cold case

Vancouver, BC – An iconic Vancouver attraction, Stanley Park, is the backdrop to a 70-year-old cold case that is one of North America’s most scintillating unsolved crimes, known as the “Babes in the Woods” mystery. The latest episode of the Nice Genes! podcast, sponsored by Genome British Columbia (Genome BC), peers at this local puzzle through a scientific lens of forensic genomics and sheds light on the fascinating discoveries that genomics can uncover.

In episode six of Nice Genes!, the show’s host, Dr. Kaylee Byers, steps out of the lab and into the woods. Armed with a magnifying glass, deerstalker cap and in-depth knowledge of genomics, Byers and her guests set out to answer the question of who killed two young children in Stanley Park over 70 years ago. Could modern genomic science help close one of Vancouver’s most infamous unsolved murders and similar cold cases?

It’s a case for the genomics detective
Clocking in at over forty-two minutes, this episode dives headfirst into the fascinating world of untold true-crime stories and forensic genealogy as Dr. Byers takes listeners on the hunt for justice.

True crime author and podcaster Eve Lazarus from Cold Case Canada and Genetic Genealogist Cece Moore from ABC’s Primetime series The Genetic Detective join host Dr. Byers to discuss why this mystery of the ‘Babes In the Woods’ puzzled and evaded the Vancouver Police Department until 2022.

And if one crime wasn’t enough, the Nice Genes! podcast also looks closely at another recently solved true crime tale – a young couple from Vancouver Island who were killed in Washington state in 1989.

Is the future of solving crimes in your DNA? 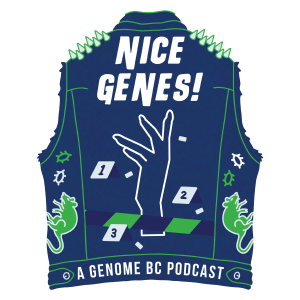 While looking for leads, Dr. Byers spots a bright red thread pointing her to questions about how our genetic material is being accessed by law enforcement: How can genomics bring murderers to justice? Should law enforcement be able to use DNA from genetic and genealogy testing sites like 23andMe to convict people of a crime? And what cost are we willing to pay to find answers?

“By going beyond how genomics can be used to identify cold cases and the perpetrators of these crimes, we discuss the ethics behind using genomics to answer these questions and more,” says Dr. Kaylee Byers, host of the Nice Genes! podcast.

Already topping the charts for Life Sciences podcasts in Canada, Nice Genes! has been renewed for a second season, which will launch this October. All six episodes of season one are available to listen on all major podcast platforms.

Nice Genes! is sponsored by Genome BC and produced by JAR Audio.

About the Nice Genes! podcast
From healthcare and biotechnology to forests and fisheries, the evolving study of genomics is leading to some of the most exciting and world-changing discoveries in science and medicine. Did you know that your genomic signature can help determine

the healthcare treatment you receive? Or that mapping the genomes of trees can inform forest management? But while the study of genomics holds great promise for the health of people, animals, and the environment, it also confronts us with big questions: How do we study genetic patterns in a way that respects sensitive genetic information, history, and equity? How do we use the power of genomic research to fight climate change? You can read more in Nice Genes! Media Kit for Season One.

About Genome British Columbia:
Genome BC is a not-for-profit organization supporting world-class genomics research and innovation to grow globally competitive life sciences sectors and deliver sustainable benefits for British Columbia, Canada and beyond. The organization’s initiatives are improving the lives of British Columbians by advancing health care and addressing environmental and natural resource challenges. In addition to scientific programming, Genome BC works to integrate genomics into society by supporting responsible research and innovation and to foster an understanding and appreciation of the life sciences among educators, students and the public. Learn more at genomebc.ca.

About Kaylee Byers:
Dr. Kaylee Byers (she/her) is a One Health scientist, urban wildlife ecologist and health communications researcher investigating innovative ways to improve people’s health, wildlife and ecosystems. She serves as the Deputy Director of the British Columbia Node of the Canadian Wildlife Health Cooperative and as a University Research Associate at Simon Fraser University.

About JAR Audio:
JAR Audio produces original podcasts for brands that make meaningful connections with audiences. Based in Vancouver, we are one of the world’s largest, fastest-growing and topically diverse podcast production agencies. Learn more at JARAudio.com.