Climate change is threatening the health of Canada’s forests, but revolutionary genomics research will give foresters a way to push back.

The forestry industry contributed more than $20 billion to Canada’s GDP in 2014, and directly and indirectly employed 288,000 people. But despite a long and viable tradition of hewing wood, climate change is causing serious concerns: the health of tree populations, which are adapted to thrive in the past climates of their regions, is suffering, making them more susceptible to insects and disease. 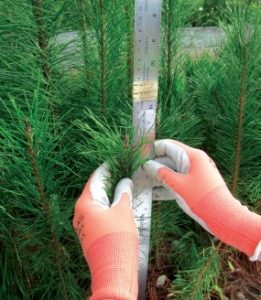 Threats to the ecological, economic and recreational value of forests was the catalyst for the AdapTree project, which launched in 2011. AdapTree is supported by Genome Canada and Genome British Columbia, as well as the provincial governments of B.C. and Alberta. Scientists are using cutting-edge genomics technologies, as well as geospatial analysis and climate modelling, to sequence seedlings and determine which genes help trees adapt to local climate conditions — and which trees should be planted where in the uncertain years ahead.

“Our goal is to introduce new practices on the ground,” says Dr. Sally Aitken, one of the project leaders and Director of the Centre for Forest Conservation Genetics at the University of British Columbia. “We’re trying to match trees to new climates, a moving target.”

We have an opportunity to change the genetic composition of what we plant to lead to more resilient forests.

Tree genomes are seven times larger than human genomes, which makes this research especially complex. But by analyzing genetic variation in DNA from lodgepole pine and spruce trees from more than 250 populations to understand how they have adapted to heat, cold and drought, Aitken and her colleagues have identified strong candidates for “assisted migration” without sacrificing genetic diversity. They’re now doing final data analyses to confirm their findings before making planting policy recommendations to provincial governments. 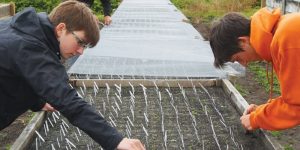 Forestry research typically involves planting seedlings from different populations in several field locations, and waiting a decade or two to see the results. Genomics, says Aitken, provides “a much more nuanced picture of the dynamics of tree adaptation much more quickly than traditional approaches.”

AdapTree co-leader Andreas Hamann, who studies landscape genomics at the University of Alberta, an amalgamation of population genetics and landscape ecology, brings a spatial perspective. His heat map models, which look at the “velocity of climate change,” will help planters keep up with global warming over the next few decades. “This is substantially better than managing our forests as if they were in a 1970s climate,” says Hamann, “which is basically what we’re doing now.”

Genome Canada invested $2.3 million in AdapTree, a $4.7 million project funded as part of the 2010 Large-Scale Applied Research Project Competition – Forestry and Environment. The project is ensuring that the right trees get planted in the right climatic areas, improving the long-term health of forests and generating economic benefits valued at hundreds of millions of dollars every year.