Taylor Date’s recovery from a childhood brain tumour is a story of heroic parenting. When Taylor Date was diagnosed with medulloblastoma, a malignant cancer tumour in the brain, at just nine months old, the standard treatment was effectively like trading one disease for another.

Growing in the cerebellum at the back of the head, medulloblastomas are typically diagnosed and treated uniformly. Standard treatment includes radiation of the entire brain and spine. Sadly, while sometimes life-saving, the radiation almost always severely stunts physical and mental growth in the child, resulting in a host of other life-altering effects, such as mental impairment, hormonal deficiencies and increased rate of stroke.

Faced with a dilemma that would alter Taylor’s life forever, her parents, Peggy Flynn and Jeff Date, crossed their fingers and took a chance. They opted to forego radiation and focus exclusively on chemotherapy to treat their baby daughter. It was an agonizing choice, but their decision to spare Taylor a severely impaired quality of life paid off. Taylor fully recovered from her disease. She’s now in her 20’s and a mom to twin boys. Taylor’s parents were lucky. What they couldn’t have known all those years ago was that their daughter’s particular type of tumour had a high survival rate with just chemotherapy. Science just hadn’t figured that out yet.

Now, a multi-disciplinary team of clinicians and scientists at the BC Cancer Agency Genome Sciences Centre teamed up with clinicians and researchers at The Hospital for Sick Children in Toronto and 46 cancer centres around the world to launch the MAGIC (Medulloblastoma Advanced Genomics International Consortium) project. Together they gathered more than 1,000 pediatric medulloblastoma samples and are obtaining a DNA-level understanding of medulloblastoma

Using cutting-edge technology, the Canadian scientists analyzed the entire genomes of primary tumours and matched recurrences. They confirmed not only that there are four distinct molecular subgroups of medulloblastoma, but that these have clinically significant subsets. They also discovered that the genetic profile of a recurring tumour has little in common with the original tumour.

“This explains why nothing would work on the recurring tumours,” says Dr. Michael Taylor, a pediatric neurosurgeon and scientist at SickKids. By classifying the tumours, clinicians will be able to diagnose and treat future pediatric patients with medulloblastoma with much greater precision — reducing radiation in children with a low-risk type, for example, to preserve their quality of life, while maintaining cure rates.

The era of the light microscope is behind us. We are now using genomic tools to ensure we provide the right therapy to children with brain cancer. 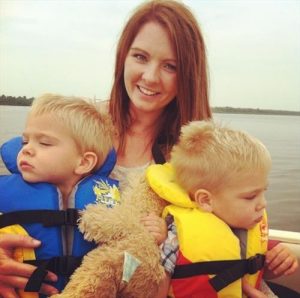 Taylor Date with her twin boys

By identifying specific molecular targets for interventions, the research will also improve clinical trials and support the development of new drug therapies tailored to individual patients. Dr. Taylor co-leads the MAGIC project with Dr. Marco Marra, director of the Genomics Innovation Centre at the BC Cancer Agency Genome Sciences Centre (one of 10 Genomic Innovation Network Nodes across the country funded by Genome Canada), and Dr. David Malkin, senior oncologist at the Hospital for Sick Children.

Research from the MAGIC project is transforming the way that children with medulloblastoma are treated. As a way of giving back, Taylor Date participated in this study in the hope that other children and families might be spared her ordeal.

“The amount of stress and pain that my parents had to endure while looking after me and praying for my health was unbearable,” she says. “I hope that one day, with help from Genome BC and the amazing doctors and nurses at Sick Kids, cancer will be cured.”

Fighting back and making an impact
HIV/Aids Chronicle: a case study in genomics medicines