The transformation of this disease from death sentence to manageable condition is an incredible story of personalized medicine and one of the world’s best examples of the power of genomics.

The HIV /AIDS epidemic began with fear and death in the early 1980’s as the world faced a new and unknown virus.

While the origin of HIV/AIDS can be traced to Sub-Saharan Africa sometime around the turn of the 20th century, it reached epidemic proportions when the US Centres for Disease Control and Prevention reported unusual clusters of a distinct strain of pneumonia—Pneumocystis pneumonia called PCP pneumonia—in homosexual men in Southern California.

It wasn’t too long before health authorities realized that nearly half of the people being diagnosed with PCP pneumonia were not homosexual men. The same opportunistic infections were also observed among hemophiliacs, heterosexual intravenous drug users, and Haitian immigrants. By August 1982, the disease had been named Acquired Immune Deficiency Syndrome (AIDS), and human immunodeficiency virus (HIV) was identified as the cause.

Over the past 30 years, scientific advances, such as the development of antiretroviral drugs, and advancements in genomics have enabled people with access to treatment to live long and healthy lives with HIV.

It’s an amazing story. The cumulative impact of this work has meant a huge increase in life expectancy for people with HIV/AIDS. Where an AIDS diagnosis once meant five to six months to live, it now means that a person at age 20, with medication and management, will live to an average age of 73 years. Because of the fewer cases of new infection less treatment is required and thus fewer healthcare dollars are being spent on drug therapy and care. 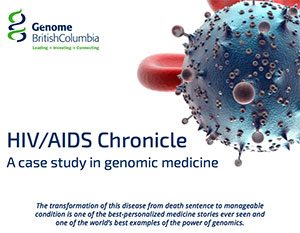 Read the full story in HIV/AIDS Chronicle: a case study in genomic medicine