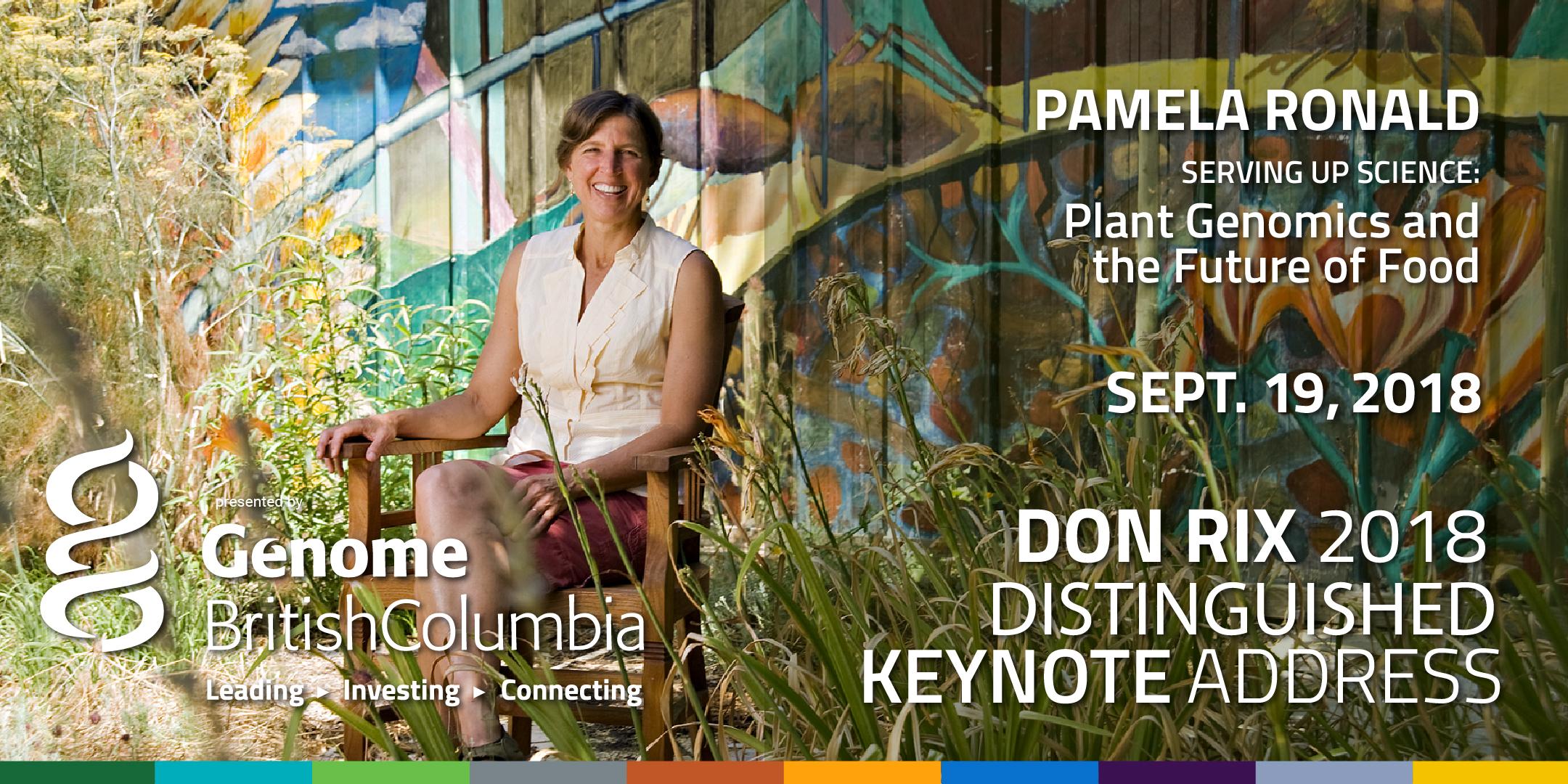 Genome BC is pleased to present Pamela Ronald as the 2018 Don Rix Distinguished Keynote speaker. Please join us on Wednesday, September 19th for her keynote: “Serving up Science: Plant Genomics and the Future of Food.”

In her lecture, plant geneticist Pamela Ronald will explain how genomic approaches are being used to produce the next generation of crops. Genetic engineering of crops, the marker-assisted breeding approaches of today and the genome editing of tomorrow are examples of a continuum of new technologies aimed at helping farmers produce food in a productive and ecologically-based manner.

An engaging Q&A session with the audience will follow the talk. This event is free of charge but seating is limited and will reach capacity. Early registration is recommended. Genome BC is proud to organize science forums at no cost but we depend on your attendance. Please be sure you can attend before registering or contact us at info@genomebc.ca or 604. 675.1021 should you need to cancel.

Banyen Books will be on site at the Vancouver Convention Centre to sell copies of Pamela Ronald’s book Tomorrow’s Table: Organic Farming, Genetics, and the Future of Food. You can purchase a copy for $20 CDN with cash, debit or credit.

Pamela Ronald is a Distinguished Professor in the Department of Plant Pathology and the Genome Center at the University of California, Davis. She serves as founding Director of the Institute for Food and Agricultural Literacy at UC Davis. She is a visiting Professor in Stanford’s Center for Food Security and the Environment.

Pamela Ronald studies rice genes that control resistance to disease and tolerance to environmental stress. Ronald and colleagues received the 2008 USDA National Research Initiative Discovery Award and the 2012 Tech Award for innovative use of technology to benefit humanity. In 2014 she was named one of the world’s most influential scientific minds by Thomson Reuters, in 2015 was selected by Scientific American as one of the world’s 100 most influential people in biotechnology and in 2016 was named one of the 50 innovators and visionaries who will lead us toward a more sustainable future by Grist magazine. She is co-author of Tomorrow’s Table: Organic Farming, Genetics, and the Future of Food. Her 2015 TED talk has been viewed by more than 1.5 million people and translated into 24 languages.

Learn how scientists are working to improve outcomes for Indigenous Peoples.