Genomics has disrupted how society approaches solutions to many pressing social issues — the impacts of climate change on the environment, cancer, rare disease, hunger, water treatment, and the development of renewable, clean energy to name just a few.

And while these advancements have provided value to society, western culture has the tendency to interpret the world in terms of Eurocentric values and experiences. Yet society is multi-cultural with many unique perspectives. Speaking in very general terms, the views of Indigenous peoples can vary greatly from the views of modern Eurocentric culture. Indigenous communities are spiritually oriented with beliefs where there can be many truths, while western society has adopted an approach where there is only one truth, based on science1. However, recognizing the importance of ancestral Indigenous ways of knowing, while raising awareness of scientific innovation across biological sciences, has potential to add value to both ways of knowing.

A spiritual connection to the land

In Canada, Indigenous people constitute approximately 5% of the population. More than a century of colonialism has shaped the relationship Canadian society has with Indigenous peoples. European policies and attitudes cut Indigenous peoples off from their traditional cultures, languages, spirituality, economies, systems of governance and other important parts of their identity2 — devastating to those communities whose languages, cultural practices and oral traditions form a spiritual connection with, and stewardship of, the land, air, water and all living creatures.

Indigenous peoples’ long-standing use and traditional knowledge of ecosystems can play an important role as unceded lands and territories continue to be of interest to extractive industries such as mining, oil exploration, and logging. Indigenous perspectives have the potential to provide insight, guidance and the environmental stewardship needed to solve the increasingly complex problems of the 21st century. It is largely accepted that marrying science with this ancestral knowledge fosters a greatly improved standard of natural resource management3. However, for Indigenous and non-Indigenous approaches to co-exist, it will require a shared decision-making process.

In the era of precision health, the use of genomic testing to deliver more precise diagnosis and effective treatments must be accessible to everyone as it is taken up into clinical practice. Genomic test results are compared to anonymized reference databases, holding thousands of individual genomes, in the search for variants that could be linked to rare diseases and disorders.

However, the results of genomic tests may not be accurate for Indigenous people because the reference databases used to compare variations are mostly populated with data from individuals of European descent. This can make it challenging to identify a genetic variant associated with a rare disease affecting an Indigenous person in Canada. Reference genomes of Indigenous peoples are needed to distinguish between a variation linked to a disease and one that might be normally present within Indigenous populations.

Genomic innovations can benefit everyone only if the appropriate data is available to classify normal variants within any population. Yet overcoming the inequity created by the lack of genomic data for Indigenous peoples presents a significant challenge. Many Indigenous peoples hold an inherent distrust of western institutions ― one that is borne out of a history of systemic racism and exploitation. Unethical and culturally insensitive genetics research in Canada and elsewhere in North America has eroded trust in genetics and genomics for many Indigenous Canadians.4

At the forefront of change is a need to demystify the science within Indigenous communities. Building trust will require an acknowledgment of past injustices and a commitment to understanding spiritual traditions and beliefs. Indigenous clinicians and researchers can lead the way, as champions of this transformative technology, while understanding the needs and values of Indigenous communities. Narrowing the precision health gap begins with dialogue that puts the perspectives of Indigenous Canadians at the forefront while helping these communities understand the value of genomic data to create equity that improves health outcomes. 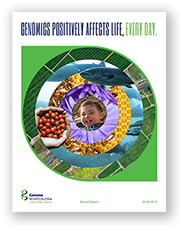